Advertising is the modern substitute for argument; its function is to make the worse appear the better.
George Santayana

No one can deny that much of our modern advertising is essentially dishonest; and it can be maintained that to lie freely and all the time for private profit is not to abuse the right of free speech, whether it is a violation of the law or not. But again the practical question is, how much lying for private profit is to be permitted by law?
Carl L. Becke

Advertising is the most potent influence in adapting and changing the habits and modes of life affecting what we eat, what we wear, and the work and play of a whole nation.
Calvin Coolidge

Many a small thing has been made large by the right kind of advertising.
Mark Twain

Special - Interest publications should realize that if they are attracting enough advertising and readers to make a profit, the interest is not so special.
Fran Lebowitz 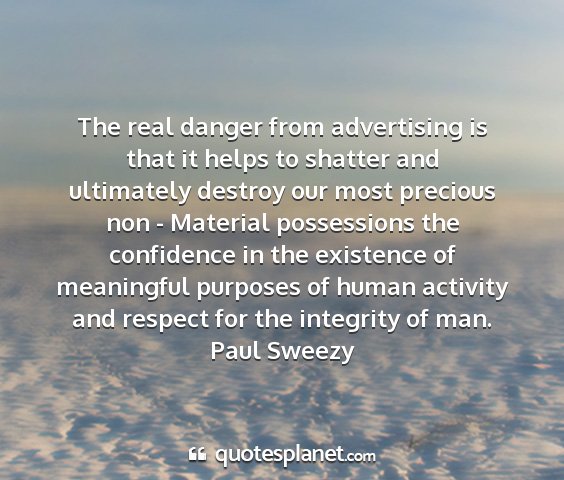 The vice - President of an advertising agency is a bit of executive fungus that forms on a desk that has been exposed to conference.
Fred Allen

Chess is as elaborate a waste of human intelligence as you can find outside an advertising agency.
Raymond Chandle 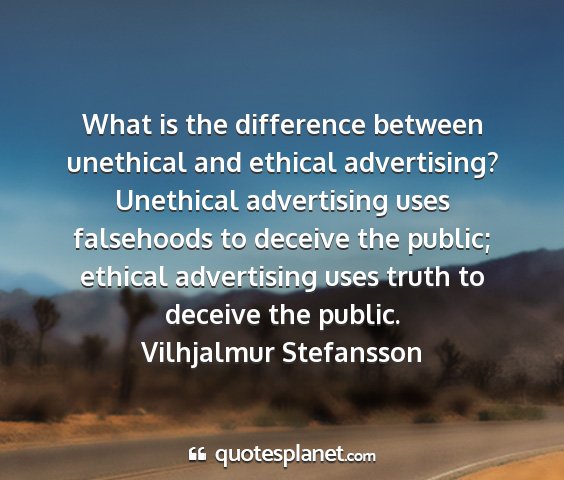 Advertising is a valuable economic factor because it is the cheapest way of selling goods, especially if the goods are worthless.
Sinclair Lewis

Today I met with a subliminal advertising executive for just a second.
Steven Wright

Advertising is the rattling of a stick inside a swill bucket.
George Orwell

The very first law in advertising is to avoid the concrete promise and cultivate the delightfully vague.
Bill Cosby

Advertising may be described as the science of arresting human intelligence long enough to get money from it.
Stephen Leacock

Advertising is the modern substitute for argument its function is to make the worse appear the better.
George Santayana

Advertising is a valuable economic factor because it is the cheapest way of selling goods, particularly if the goods are worthless.
Sinclair Lewis

I know half the money I spend on advertising is wasted. Now, if I only knew which half.
John Wanamake

Time spent in the advertising business seems to create a permanent deformity like the Chinese habit of foot - Binding.
Dean Gooderham Acheson

Advertising is like learning - - A little is a dangerous thing.
P Barnum

Advertising is tax deductible, so we all pay for the privilege of being manipulated and controlled.
Noam Chomsky