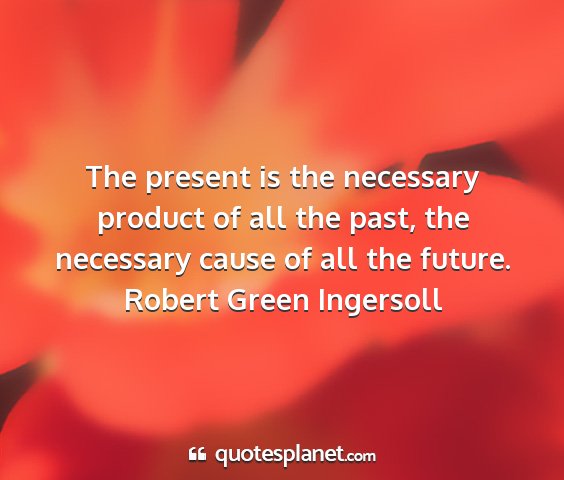 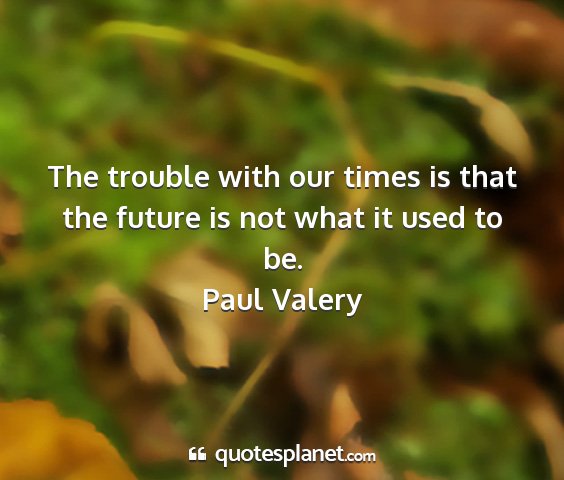 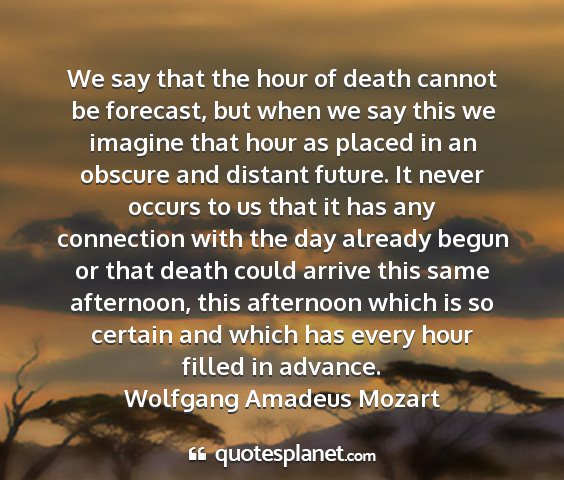 As I sit I see a dove And think of our deep, dear true love Think not about our future lives Except perhaps our growing size Keep all your thoughts alive, aglow, All will be well, no fear, I know
Unknown

Change is the law of life; and those who look only to the past or the present are certain to miss the future.
John F. Kennedy

Those who foresee the future and recognize it as tragic are often seized by a madness which forces them to commit the very acts which made it certain that what they dread shall happen.
Dame Rebecca West

When you relinquish the desire to control your future, you can have more happiness.
Nicole Kidman, in The Scotsman

My specific goal is to revolutionize the future of the species. Mathematics is just another way of predicting the future.
Ralph Abraham

I have never been able, really, to regret anything in all my life. I have always been far much too absorbed in the present moment or the immediate future to think back.
Albert Camus, The Strange

The challenges of change are always hard. It is important that we begin to unpack those challenges that confront this nation and realize that we each have a role that requires us to change and become more responsible for shaping our own future.
Hillary Rodham Clinton

If you do not think about the future, you cannot have one.
John Galsworthy

The direction in which education starts a man will determine his future life.
Plato, The Republic

When it comes to the future, there are three kinds of people those who let it happen, those who make it happen, and those who wonder what happened.
John M. Richardson, Jr.

Where a calculator on the ENIAC is equpped with 18, 000 vacuum tubes and weighs 30 tons, computers in the future may have only 1, 000 vaccuum tubes and perhaps weigh 1. 5 tons.
Unknown

If we can recognize that change and uncertainty are basic principles, we can greet the future and the transformation we are undergoing with the understanding that we do not know enough to be pessimistic.
Hazel Henderson

The best way to predict the future is to create it.
Jason Kaufmann

The speciality of the future is generalism.
Wayne Van Dyck

Who can tell who will be the President a year from now? - - John F. Kennedy, speaking to the president of Harvard about why he did not want to delay signing documents relating to a future JFK Presidential Library, 2 October 1963.
John F. Kennedy, "A Thousand Days, " by Arthur Schlesinger Jr. [1965]