God created man and, finding him not sufficiently alone, gave him a companion to make him feel his solitude more keenly.
Paul Valery 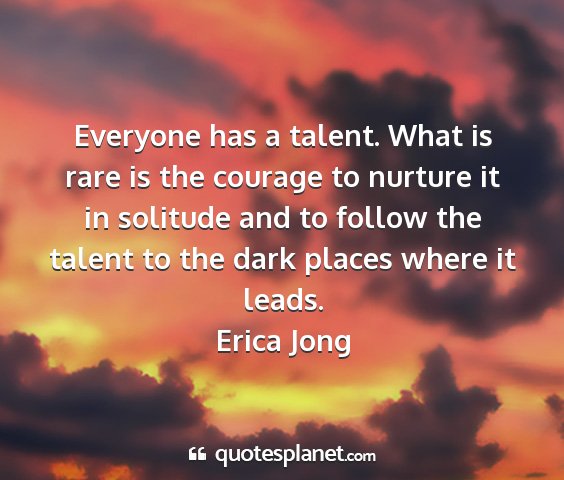 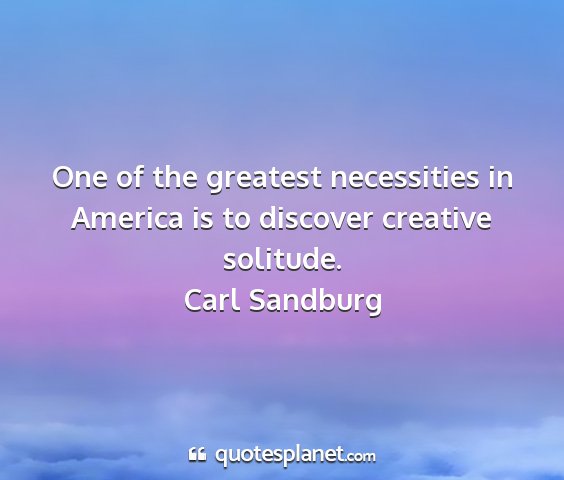 Solitude, though it may be silent as light, is like light, the mightiest of agencies for solitude is essential to man. All men come into this world alone all leave it alone.
Thomas De Quincey

In solitude especialy do we begin to appreciate the advantage of living with someone who can think.
Henry David Thoreau

A bore is a man who deprives you of solitude without providing you with company.
Gian Vincenzo Gravina

I learned... that inspiration does not come like a bolt, nor is it kinetic, energetic striving, but it comes into us slowly and quietly and all the time, though we must regularly and every day give it a little chance to start flowing, prime it with a little solitude and idleness.
Brenda Ueland

The great omission in American life is solitude... that zone of time and space, free from the outside pressures, which is the incinerator of the spirit.
Marya Mannes

But the truth was that he died from solitude, the enemy known but to few on this Earth, and whom only the simplest of us are fit to withstand. The brilliant Costaguanaro of the boulevards had died from solitude and want of faith in himself and others.
Joseph Conrad, Nostromo (on the death of Decoud)

Whosoever is delighted in solitude is either a wild beast or a god.
Sir Francis Bacon

Cultivate solitude and quiet and a few sincere friends, rather than mob merriment, noise and thousands of nodding acquaintances.
William Powell

I have never found a companion that was so companionable as solitude. We are for the most part more lonely when we go abroad among men than when we stay in our chambers. A man thinking or working is always alone, let him be where he will.
Henry David Thoreau

Solitude is such a potential thing. We hear voices in solitude, we never hear in the hurry and turmoil of life we receive counsels and comforts, we get under no other condition...
Amelia Ba

Love from one being to another can only be that two solitudes come nearer, recognize and protect and comfort each other.
Han Suyin

Solitude is the profoundest fact of the human condition. Man is the only being who knows he is alone.
Octavio Paz

One hour of thoughtful solitude may nerve the heart for days of conflict - Girding up its armor to meet the most insidious foe.
Percival

Reading well is one of the great pleasures that solitude can afford you.
Harold Bloom, O Magazine, April 2003

To make the right choices in life, you have to get in touch with your soul. To do this, you need to experience solitude, which most people are afraid of, because in the silence you hear the truth and know the solutions.
Deepak Chopra

He who lives in solitude may make his own laws.
Publilius Syrus

One can acquire everything in solitude, except character.
Marie Stendhal

Solitude is the beginning of all freedom.
William Orville Douglas

Talents are best nurtured in solitude character is best formed in the stormy billows of the world.
Johann von Goethe

I love to be alone. I never found the companion that was so companionable as solitude.
Henry David Thoreau

One whose chief regard is for his own mind, and for the divinity within him and the service of its goodness, will strike no poses, utter no complaints, and crave neither for solitude nor yet for a crowd. Best of all, his life will be free from continual pursuing and avoiding.
Marcus Aurelius, Meditations? Book Three

Real misanthropes are not found in solitude, but in the real world since it is experience of life, and not philosophy, which produces real hatred of mankind.
Giacomo Leopardi

The great man is he who in the midst of the crowd keeps with perfect sweetness, the independence of solitude.
Ralph Waldo Emerson, Self Reliance (essay)

The worst solitude is to be destitute of sincere friendship.
Sir Francis Bacon

Solitude is as needful to the imagination as society is wholesome for the character.
James Russell Lowell

The power to bring me out of solitude - Or to push me back into it - Had never belonged to another person. It was mine and only mine.
Martha Beck, O Magazine, February 2003