Although the world is full of suffering, it is also full of the overcoming of it.
Helen Kelle 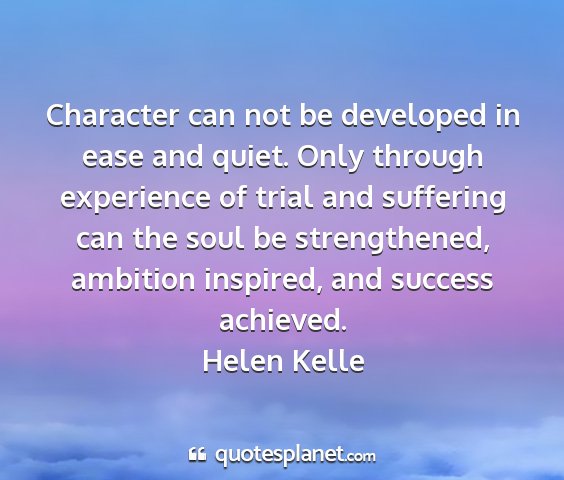 One does not love a place the less for having suffered in it unless it has all been suffering, nothing but suffering.
Jane Austen 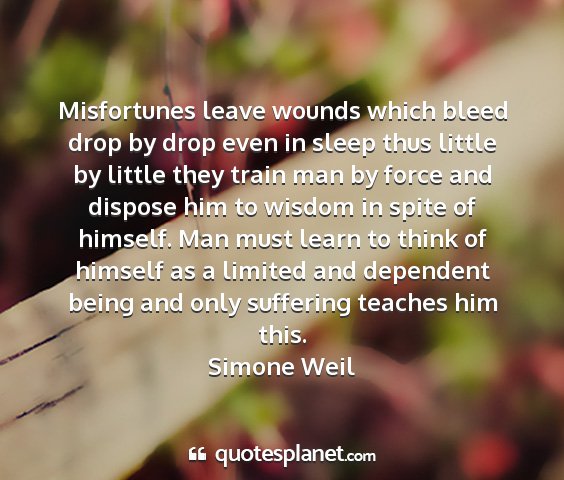 We mortals with immortal minds are only born for sufferings and joys, and one could almost say that the most excellent receive joy through sufferings.
Ludwig van Beethoven

The function of socialism is to raise suffering to a higher level.
Norman Maile

I am bigger than anything that can happen to me. All these things, sorrow, misforturne, and suffering, are outside my door. I am in the house, and I have the key.
Charles Fletcher Lummis

For most men the love of justice is only the fear of suffering injustice.
La Rochefoucauld

Although the world is full of suffering, it is full also of the overcoming of it.
Helen Kelle

I cannot believe that the inscrutable universe turns on an axis of suffering surely the strange beauty of the world must somewhere rest on pure joy.
Louise Bogan

We are healed from suffering only by experiencing it to the full.
Marcel Proust

That man is good who does good to others if he suffers on account of the good he does, he is very good if he suffers at the hands of those to whom he has done good, then his goodness is so great that it could be enhanced only by greater sufferings and if he should die at their hands, his virtue can go no further it is heroic, it is perfect.
La Bruyere

But penance need not be paid in suffering... It can be paid in forward motion. Correcting the mistake is a positive move, a nurturing move.
Barbara Hall, A Summons to New Orleans, 2000

You cannot do wrong without suffering wrong.
Ralph Waldo Emerson

There are three rings involved with marriage. The engagement ring, the wedding ring, and the suffering.
Woody Allen

Whenever evil befalls us, we ought to ask ourselves, after the first suffering, how we can turn it into good. So shall we take occasion, from one bitter root, to raise perhaps many flowers.
Leigh Hunt

A poet is an unhappy being whose heart it torn by secret sufferings, but whose lips are so strangely formed that when the sighs and the cries escape them, they sound like beautiful music... and then people crowd about the poet and say to him: Sing for us soon again; that is as much as to say. May new sufferings torment your soul.
Soren Kierkegaard

A cold in the head cause less suffering than an idea.
Jules Renard

You desire to know the art of living, my friend It is contained in one phrase make use of suffering.
Henri Frdric Amiel

We are suffering from too much sarcasm.
Marianne Moore

Seeing much, suffering much, and studying much, are the three pillars of learning.
Benjamin Disraeli

People have a hard time letting go of their suffering. Out of a fear of the unknown, they prefer suffering that is familiar.
Thich Nhat Hanh