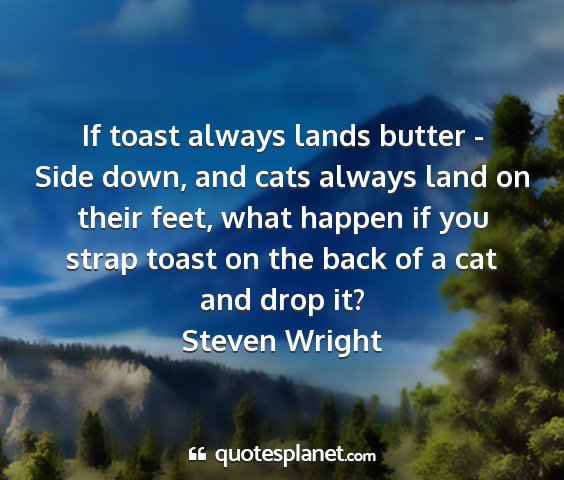 How you behave toward cats here below determines your status in Heaven.
Robert A. Heinlein 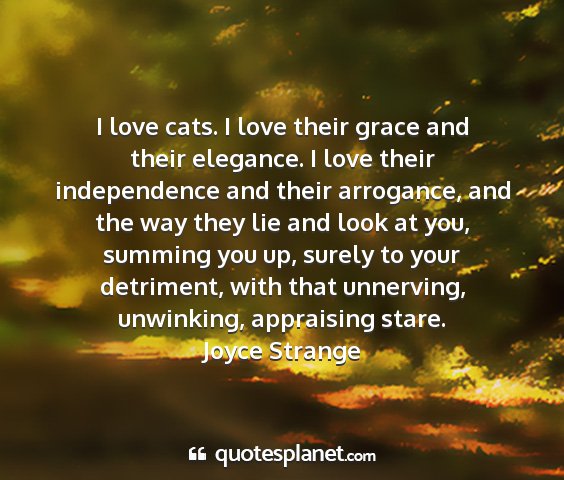 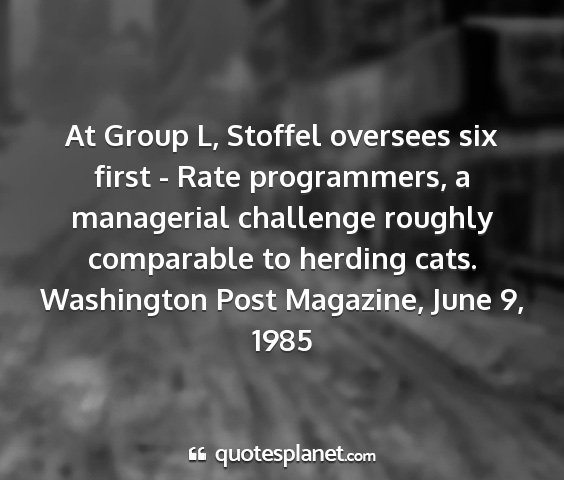 No matter how much cats fight, there always seem to be plenty of kittens.
Abraham Lincoln

No matter how much the cats fight, there always seem to be plenty of kittens.
Abraham Lincoln

No matter how much cats fight there always seem to be plenty of Kittens.
Abraham Lincoln, On Marriage

Authors like cats because they are such quiet, lovable, wise creatures, and cats like authors for the same reasons.
Robertson Davies

It is impossible for a lover of cats to banish these alert, gentle, and discriminating friends, who give us just enough of their regard and complaisance to make us hunger for more.
Agnes Repplie

Cats are notoriously sore losers. Coming in second best, especially to someone as poorly coordinated as a human being, grates their sensibility.
Stephen Bake

After dark all cats are leopards. Zuni.
American Indian Prove

Poets generally love cats - - Because poets have no delusions about their own superiority.
Marion Garretty

I meant, said Ipslore bitterly, what is there in this world that truly makes living worthwhile? Death thought about it. Cats, he said eventually. Cats are nice.
Terry Pratchett, Sourcery

There are two means of refuge from the miseries of life: music and cats.
Albert Schweitze

There is a particular disdain with which Siamese cats regard you. Anyone who has walked in on the Queen cleaning her teeth will be familiar with the feeling.
Douglas Adams, The Salmon of Doubt, p. 215

Some people say that cats are sneaky, evil, and cruel. True, and they have many other fine qualities as well.
Missy Dizick

Cats seem to go on the principle that it never does any harm to ask for what you want.
Joseph Wood Krutch

I meant, said Ipslore bitterly, what is there in this world that truly makes living worthwhile? Death thought about it. Cats, he said eventually. Cats are nice.
Terry Pratchet, Sourcery

I like pigs. Dogs look up to us. Cats look down on us. Pigs treat us as equals.
Sir Winston Churchill

Cats regard people as warmblooded furniture.
Jacquelyn Mitchard, The Deep End of the Ocean

Cats and monkeys; monkeys and cats; all human life is there.
Henry James

In the night all cats are gray.
Miguel de Cervantes

All cats are gray in the dark.
Benjamin Franklin

If toast always lands butter - Side down, and cats always land on their feet, what happens if you strap toast on the back of a cat and drop it.
Steven Wright