We find no real satisfaction or happiness in life without obstacles to conquer and goals to achieve.
Maxwell Maltz, Communication Bulletin for Managers & Supervisors, June 2004

It is a good idea to be ambitious, to have goals, to want to be good at what you do, but it is a terrible mistake to let drive and ambition get in the way of treating people with kindness and decency. The point is no that they will then be nice to you. It is that you will feel better about yourself.
Robert Solow 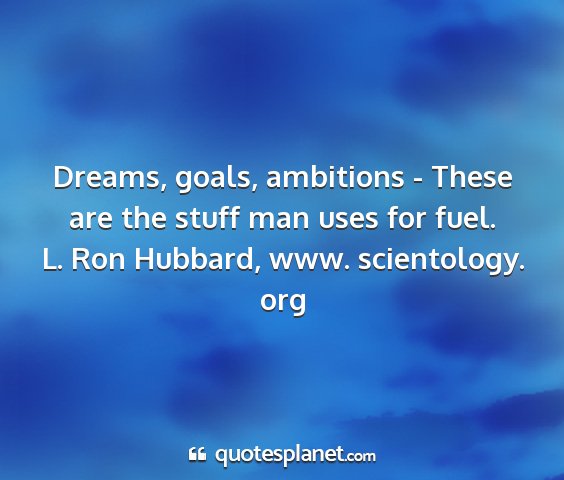 The victory of success is half won when one gains the habit of setting goals and achieving them. Even the most tedious chore will become endurable as you parade through each day convinced that every task, no matter how menial or boring, brings you closer to fulfilling your dreams.
Og Mandino

Our goals can only be reached through a vehicle of a plan, in which we must fervently believe, and upon which we must vigorously act. There is no other route to success.
Stephen A. Brennan

Only an alert and knowledgeable citizenry can complel the proper meshing of the huge industrial and military machinery of defense with our peaceful methods and goals, so that security and liberty may prosper together.
Dwight D Eisenhowe

Social engaged intellectuals must accept reality as they found it and shape it toward positive social goals, not stand aside in self - Righteous isolation.
John Dewey

No one lives long enough to learn everything they need to learn starting from scratch. To be successful, we absolutely, positively have to find people who have already paid the price to learn the things that we need to learn to achieve our goals.
Brian Tracy

In the absence of clearly - Defined goals, we become strangely loyal to performing daily trivia until ultimately we become enslaved by it.
Robert Heinlein

There is no sudden leap into the stratosphere... There is only advancing step by step, slowly and tortuously, up the pyramid towards your goals....
Ben Stein

Set priorities for your goals. A major part of successful living lies in the ability to put first things first. Indeed, the reason most major goals are not achieved is that we spend our time doing second things first.
Robert J. McKain

The most important thing about having goals is having one.
Geoffrey F. Albert

Discipline is the bridge between goals and accomplishment.
Jim Rohn