They who seek to establish systems of government based on the regimentation of all human beings by a handful of individual rulers... call this a new order. It is not new and it is not order.
Franklin Delano Roosevelt 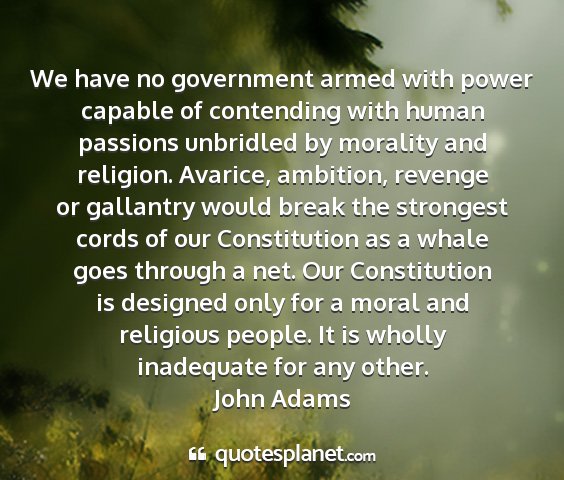 The art of government is the organization of idolatry.
George Bernard Shaw 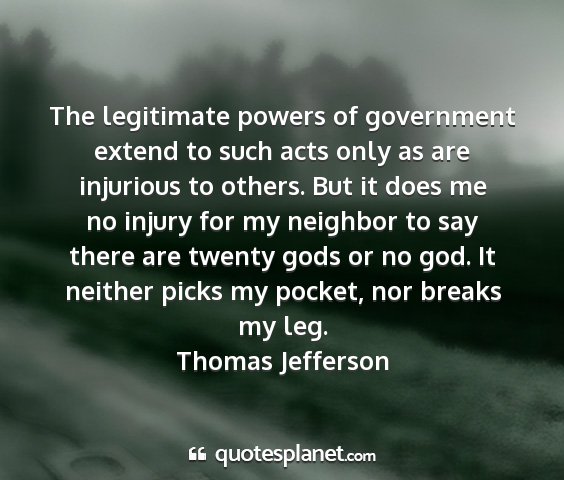 When you have an efficient government, you have a dictatorship.
Harry S Truman

An elephant is a mouse, built to government specifications.
John Herro

That government is best which governs least. - From Civil Disobedience.
Henry David Thoreau

Our Constitution was made only for a moral and religious people. It is wholly inadequate to the government of any other.
John Quincy Adams

Government is not reason, it is not eloquence, it is force like fire, a troublesome servant and a fearful master. Never for a moment should it be left to irresponsible action.
George Washington

Whenever any form of government becomes destructive of these ends life, liberty, and the pursuit of happiness it is the right of the people to alter or abolish it, and to institute new government...
Thomas Jefferson (The Declaration of Independence)

On account of us being a democracy and run by the people, we are the only nation in the world that has to keep a government four years, no matter what it does.
Will Rogers

The point to remember is what the government gives it must first take away.
John S. Coleman

Government, is the last analysis, is organized opinion. Where there is little or no public opinion, there is likely to be bad government.
MacKenzie King 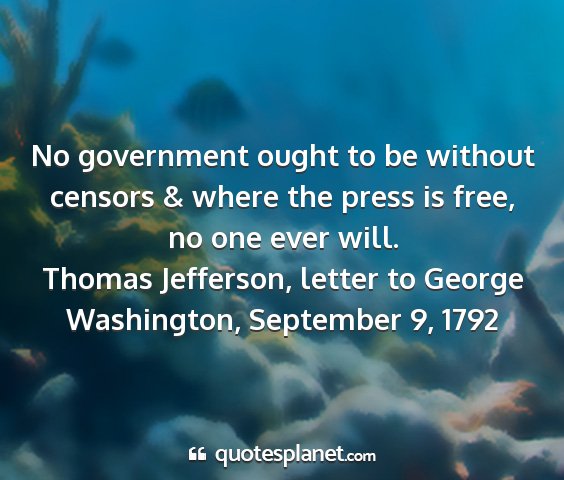 I wish the government would put a tax on pianos for the incompetent.
Dame Edith Sitwell

The teaching of politics is that the Government, which was set for protection and comfort of all good citizens, becomes the principal obstruction and nuisance with which we have to contend? The cheat and bully and malefactor we meet everywhere is the Government.
Ralph Waldo Emerson, Journal, 1860

If liberty and equality, as is thought by some are chiefly to be found in democracy, they will be best attained when all persons alike share in the government to the utmost.
Aristotle, Politics

The best minds are not in government. If any were, business would hire them away.
Ronald Reagan

The basis of our government being the opinion of the people, the very first object should be to keep that right and were it left to me to decide whether we should have a government without newspapers, or newspapers wthout government, I should not hesita.
Thomas Jefferson

It is horrifying that we have to fight our own government to save the environment.
Ansel Adams

The impersonal hand of government can never replace the helping hand of a neighbor.
Hubert H. Humphrey

Our constitution works. Our great republic is a government of laws, not of men.
Gerald R. Ford, on becoming President, Aug. 9, 1974

I think that people want peace so much that one of these days government had better get out of their way and let them have it.
Dwight D Eisenhowe

Whenever you have an efficient government you have a dictatorship.
Harry S Truman, Lecture at Columbia University, 28 Apr. 1959

The government consists of a gang of men exactly like you and me. They have, taking one with another, no special talent for the business of government they have only a talent for getting and holding office.
H. L. Mencken

The Second Amendment reveals a profound principle of American government - The principle of civilian ascendency over the military.
William Orville Douglas

It has been said that democracy is the worst form of government except all the others that have been tried.
Sir Winston Churchill

Universal suffrage is the government of a house by its nursery.
Prince Otto

A government that robs Peter to pay Paul can always depend on the support of Paul.
George Bernard Shaw

I love my government not least for the extent to which it leaves me alone.
John Updike

A little rebellion now and then... is a medicine necessary for the sound health of government.
Thomas Jefferson, Letter to James Madison, 1787

By definition, a government has no conscience. Sometimes it has a policy, but nothing more.
Albert Camus