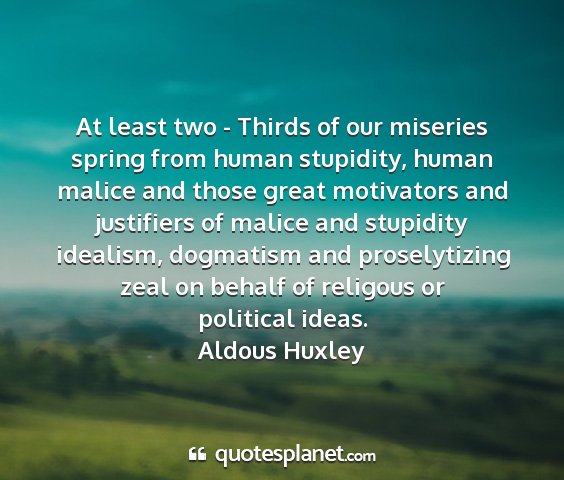 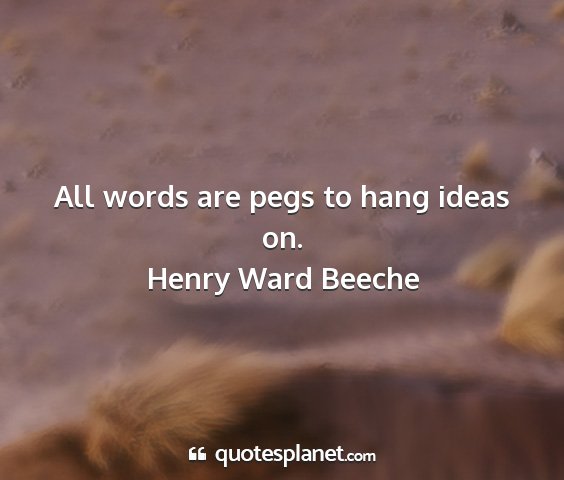 There is nothing easier than lopping off heads and nothing harder than developing ideas.
Fyodor Dostoevsky

It is useless to send armies against ideas.
Georg Brandes

Without absolutes revealed from without by God Himself, we are left rudderless in a sea of conflicting ideas about manners, justice and right and wrong, issuing from a multitude of self - Opinionated thinkers.
John Owen

The best way to have a good idea is to have a lot of ideas.
Dr. Linus Pauling

To die for an idea it is unquestionably noble. But how much nobler it would be if men died for ideas that were true.
H. L. Mencken

In the realm of ideas it is better to let the mind sally forth, even if some precious preconceptions suffer a mauling.
Robert F. Goheen

Language is only the instrument of science, and words are but the signs of ideas.
Samuel Johnson

Dressing up is inevitably a substitute for good ideas. It is no coincidence that technically inept business types are known as suits.
Paul Graham, September 2004

It is not in the world of ideas that life is lived. Life is lived for better or worse in life, and to a man in life, his life can be no more absurd than it can be the opposite of absurd, whatever that opposite may be.
Archibald MacLeish

The making of a journalist: no ideas and the ability to express them.
Karl Kraus

It is by acts and not by ideas that people live.
Anatole France

The thinker dies, but his thoughts are beyond the reach of destruction. Men are mortal but ideas are immortal.
Richard Adams

In a war of ideas, it is people who get killed.
Stanislaus J. Lec

Ideas are refined and multiplied in the commerce of minds. In their splendor, images effect a very simple communion of souls.
Gaston Bachelard

The thinker dies, but his thoughts are beyond the reach of destruction. Men are mortal, but ideas are immortal.
William Lippmann

The need to be right all the time is the biggest bar to new ideas. It is better to have enough ideas for some of them to be wrong than to be always right by having no ideas at all.
Edward De Bono

All the really good ideas I ever had came to me while I was milking a cow.
Grant Wood

Be not astonished at new ideas for it is well known to you that a thing does not therefore cease to be true because it is not accepted by many.
Spinoza

To die for an idea; it is unquestionably noble. But how much nobler it would be if men died for ideas that were true!
H. L. Mencken

Every composer knows the anguish and despair occasioned by forgetting ideas which one had no time to write down.
Hector Berlioz

I am about to put foward some major ideas they will be heard and pondered. If not all of them please, surely a few will in some sort, then, I shall have contributed to the progress of our age, and shall be content.
Marquis de Sade