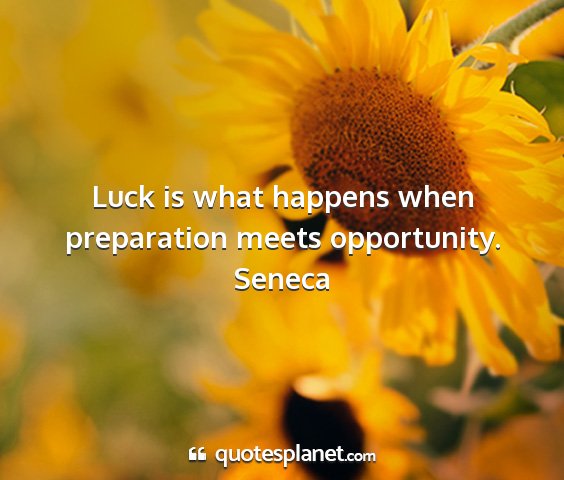 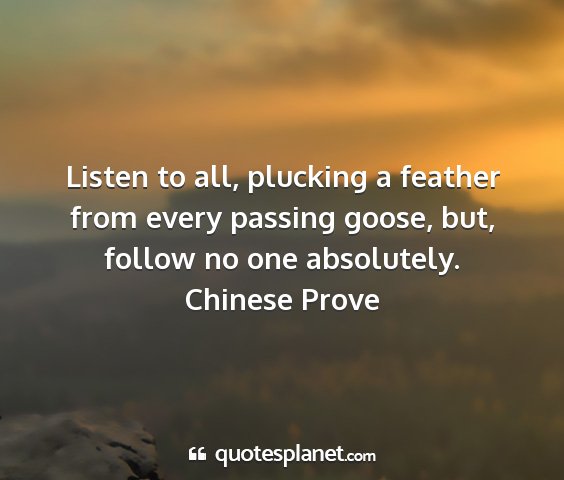 Never expose yourself unnecessarily to danger; a miracle may not save you... and if it does, it will be deducted from your share of luck or merit.
The Talmud

The only sure thing about luck is that it will change.
Bret Harte 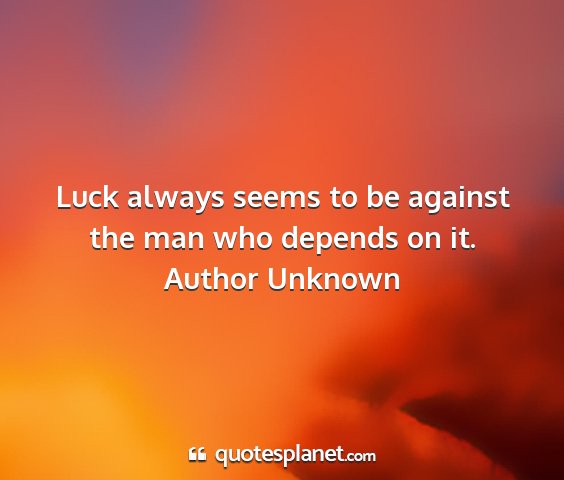 I am a great believer in luck and I find the harder I work the more I have of it.
Stephen Butler Leacock

Luck? Sure. But only after long practice and only with the ability to think under pressure.
Babe Didrikson

Success is simply a matter of luck. Ask any failure.
Earl Wilson

Never have anything to do with an unlucky place, or an unlucky man. I have seen many clever men, very clever men, who had not shoes to their feet. I never act with them. Their advice sounds very well, but they cannot get on themselves; and if they cannot do good to themselves, how can they do good for me?
Rothschild

I find that the harder I work, the more luck I seem to have.
Thomas Jefferson

The lucky man is he who knows how much to leave to chance.
C. S. Forester, Commodore Hornblowe

If we are lucky, we can give in and rest without feeling guilty. We can stop doing and concentrate on being.
Kathleen Norris, O Magazine, July 2003

He who does not venture has no luck.
Mexican Prove

Be ready when opportunity comes... Luck is the time when preparation and opportunity meet.
Roy D. Chapin, Jr.

A best friend it like a four leaf clover - Hard to find, and lucky to have.
Unknown

All my life I have tried to pluck a thistle and plant a flower wherever the flower would grow in thought and mind.
Abraham Lincoln

Diligence is the mother of good luck.
American Prove

An occasional lucky guess as to what makes a wife tick is the best a man can hope for, Even then, no sooner has he learned how to cope with the tick than she tocks.
Ogden Nash

This is the third time; I hope good luck lies in odd numbers.... There is divinity in odd numbers, either in nativity, chance, or death.
William Shakespeare, "The Merry Wives of Windsor", Act 5 scene 1

It is bad luck to be superstitious.
Andrew W. Mathis

If you were born lucky, even your rooster will lay eggs.
Assyrian Prove

Happiness is always a by - Product. It is probably a matter of temperament, and for anything I know it may be glandular. But it is not something that can be demanded from life, and if you are not happy you had better stop worrying about it and see what treasures you can pluck from your own brand of unhappiness.
Robertson Davies

Luck is what you have left over after you give 100 percent.
Langston Coleman

What luck for rulers that men do not think.
Adolf Hitle

Love is the flower of life, and blossoms unexpectedly and without law, and must be plucked where it is found, and enjoyed for the brief hour of its duration.
D. H. Lawrence