Like dear St. Francis of Assisi I am wedded to Poverty: but in my case the marriage is not a success.
Oscar Wilde, , in a letter to his friend, Frances Forbes - Robertson, who had invited him to her wedding in London, but Wilde wa

I used to believe that marriage would diminish me, reduce my options. That you had to be someone less to live with someone else when, of course, you have to be someone more.
Candice Bergen 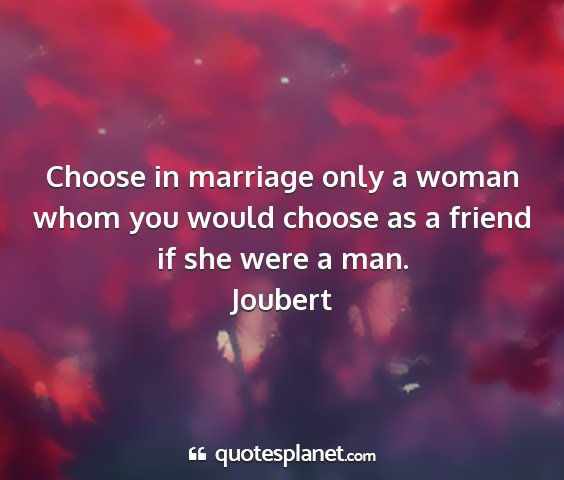 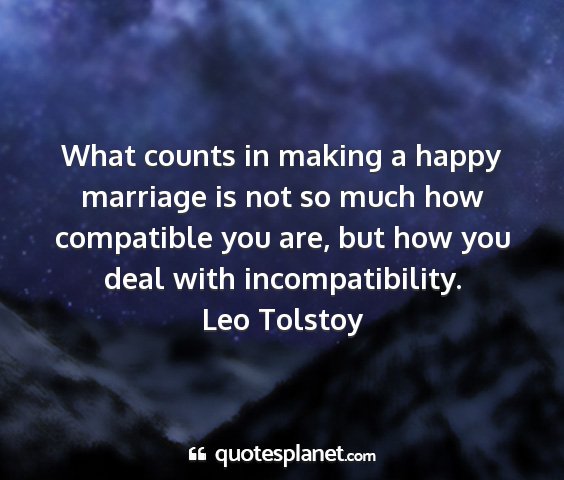 Friends need not agree in everything or go always together, or have no comparable other friendships of the same intimacy. On the contrary, in friendship union is more about ideal things and in that sense it is more ideal and less subject to trouble than marriage is.
George Santayana 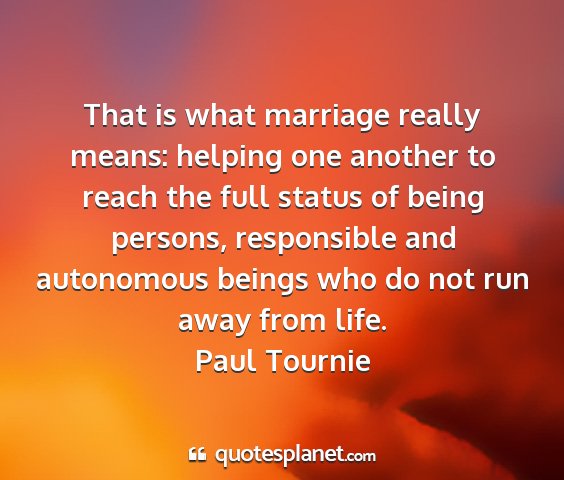 Nothing in life is as good as the marriage of true minds between man and woman. As good? It is life itself.
Pearl S. Buck

The proper basis for marriage is a mutual misunderstanding.
Oscar Wilde

Romantic love is an illusion. Most of us discover this truth at the end of a love affair or else when the sweet emotions of love lead us into marriage and then turn down their flames.
Sir Thomas More

For the first year of marriage I had basically a bad attitude. I tended to place my wife underneath a pedestal.
Woody Allen

When marrying, ask yourself this question Do you believe that you will be able to converse well with this person into your old age Everything else in marriage is transitory.
Friedrich Wilhelm Nietzsche

Friendship is the marriage of the soul, and this marriage is liable to divorce.
Mark Twain

Odd, the years it took to learn one simple fact that the prize just ahead, the next job, publication, love affair, marriage always seemed to hold the key to satisfaction but never, in the longer run, sufficed.
Amanda Cross

There are three rings in marriage. The engagement ring... The wedding ring... and the suffering.
Trevor Rook

Marriage is an adventure, like going to war.
Gilbert Keith Chesterton

Keep thy eyes wide open before marriage, and half - Shut afterwards.
Benjamin Franklin

There is no greater excitement than to support an intellectual wife and have her support you. Marriage is a partnership in which each inspires the other, and brings fruition to both of you.
Millicent Carey McIntosh

The days just prior to marriage are like a snappy introduction to a tedious book.
Wilson Mizne

Never say that marriage has more of joy than pain.
Euripides, Alcestis, 438 B. C.

Marriage is a wonderful institution, but who would want to live in an institution.
Henry Louis Mencken

A marriage is always made up of two people who are prepared to swear that only the other one snores.
Terry Pratchett, The Fifth Elephant

It is always incomprehensible to a man that a woman should ever refuse an offer of marriage.
Jane Austen

For it is mutual trust, even more than mutual interest that holds human associations together. Our friends seldom profit us but they make us feel safe... Marriage is a scheme to accomplish exactly that same end.
H. L. Mencken

Love in marriage should be the accomplishment of a beautiful dream, and not, as it too often is, the end.
Alphonse Ka

Marriage: a book of which the first chapter is written in poetry and the remaining chapters in prose.
Beverly Nichols

Being able to support oneself allows one to choose a marriage out of love and not just economic dependence. It also allows one to risk that marriage.
Gloria Steinem

Chains do not hold a marriage together. It is threads, hundreds of tiny threads, which sew people together through the years.
Robert Oxton Bolt