Please choose the way of peace. ... In the short term there may be winners and losers in this war that we all dread. But that never can, nor never will justify the suffering, pain and loss of life your weapons will cause.
Mother Teresa, - - Letter to U. S. President George Bush and Iraqi President Saddam Hussein, January 1991. 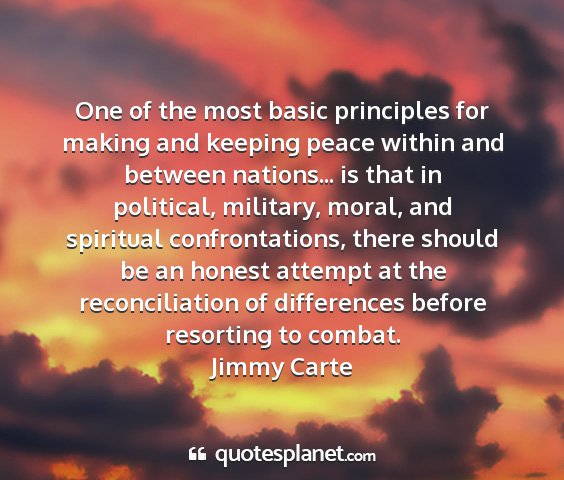 Peace is not a relationship of nations. It is a condition of mind brought about by a serenity of soul. Peace is not merely the absence of war. It is also a state of mind. Lasting peace can come only to peaceful people.
Jawaharlal Nehru 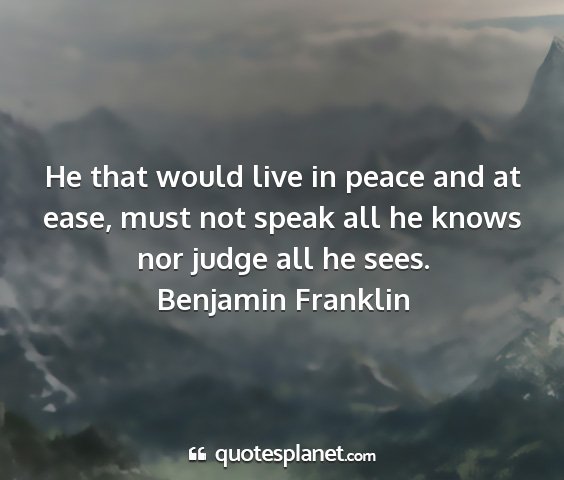 The world must be made safe for democracy. Its peace must be planted upon the tested foundations of political liberty.
Woodrow Wilson, Speech to Congress, Apr. 2, 1917

Out of the strain of the Doing, Into the peace of the Done.
Julia Louise Woodruff

The more bombers, the less room for doves of peace.
Nikita Khrushchev

I dream of wayward gulls and all landless lovers, rare moments of winter sun, peace, privacy, for everyone.
William F. Claire

If the Prince of Peace should come to earth, one of the first things he would do would be to put psychiatrists in their place.
Aldous Huxley

Nothing can bring you peace but yourself.
Ralph Waldo Emerson 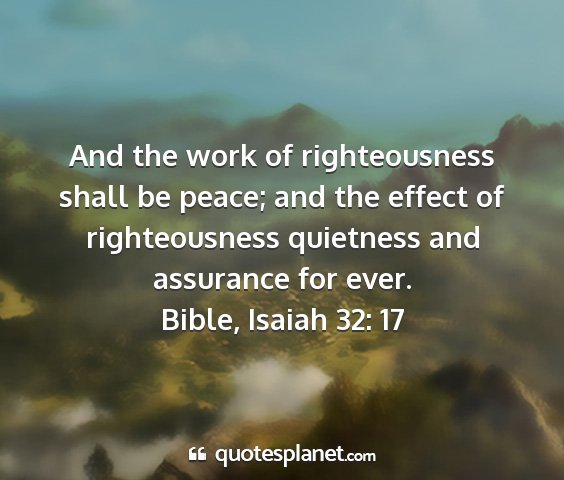 A life of peace, purity, and refinement leads to a calm and untroubled old age.
Cicero

Once a man has some money, peace begins to sound good to him.
Clint Eastwood, Movie: "A Fistful of Dollars, " 1964

That the said Constitution shall never be construed to authorize Congress to infringe the just liberty of the press or the rights of conscience or to prevent the people of the United states who are peaceable citizens from keeping their own arms...
Samuel Adams

The more you sweat during peace, The less you bleed during war.
Brian Wilson

Indecision regarding the choice among pleasures temporarily robs a man of inner peace. After due reflection, he attains joy by turning away from the lower pleasures and seeking the higher ones.
I Ching

Has not peace honours and glories of her own unattended by the dangers of war?
Hermocrates of Syracuse

But then peace, peace I am so mistrustful of it so much afraid that it means a sort of weakness and giving in.
D. H. Lawrence

If there is to be any peace it will come through being, not having.
Henry Mille

When the power of love overcomes the love of power the world will finally know peace.
Jimi Hendrix

There is no way to peace peace is the way.
A. J. Muste

The absence of war is not peace.
Harry S Truman

But all who humble themselves before the Lord shall be given every blessing and shall have wonderful peace.
Psalm 3711 TLB Bible

I felt that I had done my duty. Nothing drove me now. I had run out of causes and was as close as I might ever be to peace. With all this behind me, I felt that if I had to die now, it was all right. I would not protest quite so loudly as I would have at any other time.
Roger Zelazny, The Courts of Chaos

The fact is that we prepare for war like giants, and for peace like pygmies.
Lester Bowles Pearson

All we are saying is give peace a chance.
John Lennon

One path alone leads to a life of peace The path of virtue.
Juvenal

To be at peace with ourselves we need to know ourselves.
Caitlin Matthews

It is within the families themselves where peace can begin.
Susan Partnow

One path alone leads to a life of peace: The path of virtue.
Juvenal

Blessed are the peacemakers, for they will be called sons of God.
Bible, Jesus in Matthew 5: 9