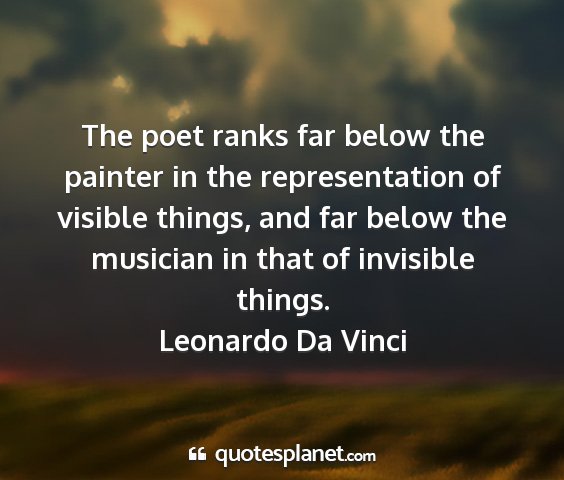 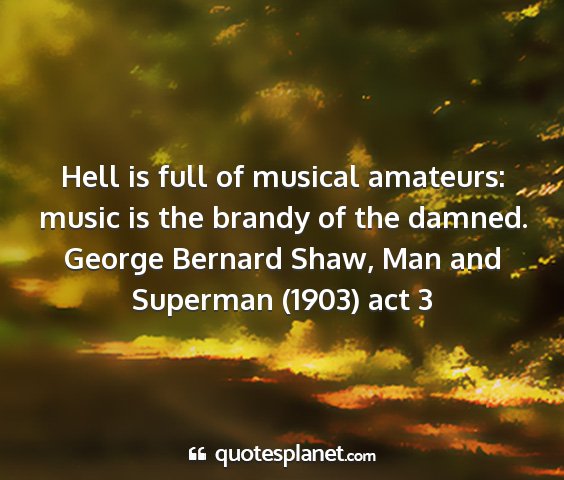 One good thing about music, when it hits you, you feel no pain.
Bob Marley

The truest expression of a people is in its dance and music.
Agnes de Mille

It is in learning music that many youthful hearts learn to love.
Ricard

Number is the Word but is not utterance it is wave and light, though no one sees it it is rhythm and music, though no one hears it. Its variations are limitless and yet it is immutable. Each form of life is a particular reverberation of Number.
Maurice Druon

Marty This tasteless cover is a good indication of the lack of musical invention within. The musical growth of this band cannot even be charted. They are treading water in a sea of retarded sexuality and bad poetry.
This Is Spinal Tap

Music is a higher revelation than philosophy.
Ludwig van Beethoven

Music is the divine way to tell beautiful, poetic things to the heart.
Pablo Casals

Writing has laws of perspective, of light and shade just as painting does, or music. If you are born knowing them, fine. If not, learn them. Then rearrange the rules to suit yourself.
Truman Capote

Music is essentially useless, as life is but both have an ideal extension which lends utility to its conditions.
George Santayana

The prelude to Tristan and Isolde sounded as if a bomb had fallen into a large music factory and had thrown all the notes into confusion.
The Tribune, Berlin, 1871

Music is well said to be the speech of angels.
Thomas Carlyle

Those who dance were thought to be quite insane by those who could not hear the music.
Angela Monet

If a man does not keep pace with his companions, perhaps it is because he hears a different drummer. Let him step to the music which he hears, however measured or faraway.
Henry David Thoreau

Music has charms to soothe the savage breast To soften rocks, or bend a knotted oak.
William Congreve

The function of music is to release us from the tyranny of conscious thought.
Sir Thomas Beecham

There is no feeling, except the extremes of fear and grief, that does not find relief in music.
George Eliot, The Mill on the Floss, 1860

I could be whatever I wanted to be if I trusted that music, that song, that vibration of God that was inside of ME.
Shirley MacLaine

Of all noises, I think music is the least disagreeable.
Samuel Johnson

A man should hear a little music, read a little poetry, and see a fine picture every day of his life, in order that worldly cares may not obliterate the sense of the beautiful which God has implanted in the human soul.
Johann Wolfgang von Goethe

Good music is good music, and everything else can go to hell.
Dave Matthews, VH1 Special: Trey And Dave Go To Africa

Music is a discipline, and a mistress of order and good manners, she makes the people milder and gentler, more moral and more reasonable.
Martin Luthe

Great art is as irrational as great music. It is mad with its own loveliness.
George Jean Nathan

Life without music would be a mistake.
Friedrich Nietzsche, Thus Spoke Zarathustra