The young always have the same problem - How to rebel and conform at the same time. They have now solved this by defying their parents and copying one another.
George Chapman

The only people who seem to have nothing to do with the education of the children are the parents.
G. K. Chesterton

Distrust and caution are the parents of security.
Benjamin Franklin 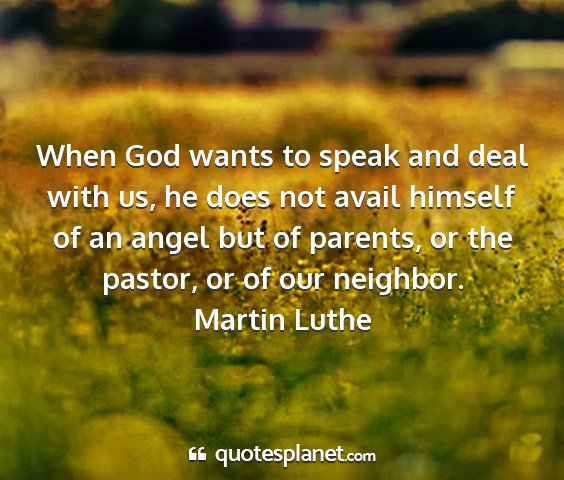 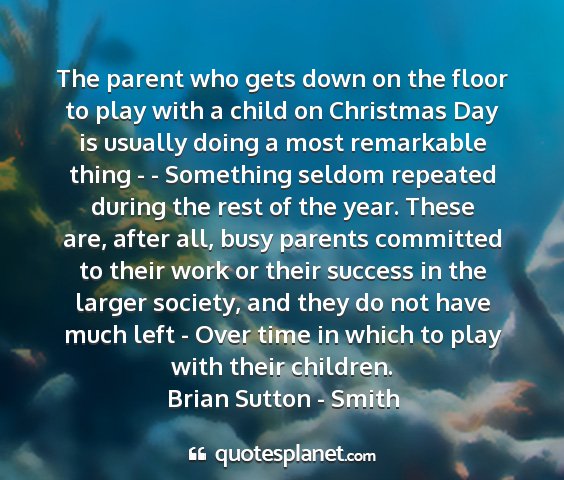 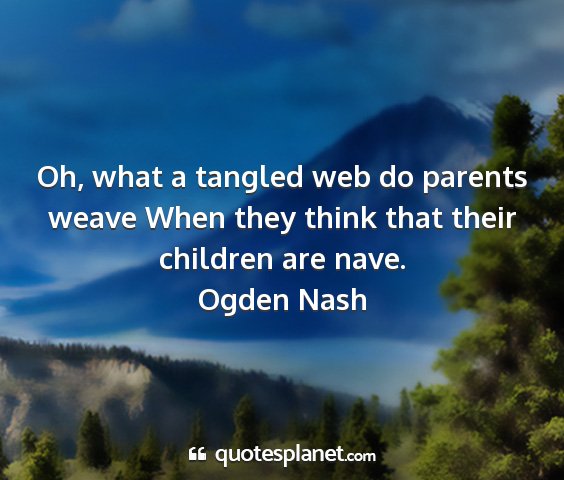 We are the people our parents warned us about.
Jimmy Buffett

You know that being an American is more than a matter of where your parents came from. It is a belief that all men are created free and equal and that everyone deserves an even break.
Harry S Truman

When I was a kid my parents moved a lot, but I always found them.
Rodney Dangerfield

Parents learn a lot from their children about coping with life.
Muriel Spark

Sex is hereditary. If your parents never had it, chances are you wont either.
Joseph Fische

My parents only had one argument in forty - Five years. It lasted forty - Three years.
Cathy Ladman

Children begin by loving their parents. As they grow older, they judge them. Sometimes they forgive them.
Author Unknown

All conservatives are such from personal defects. They have been effeminated by position or nature, born halt and blind, through luxury of their parents, and can only, like invalids, act on the defensive.
Ralph Waldo Emerson

How you lose or keep your hair depends on how wisely you choose your parents.
Edward R. Nida

Hypocrite The man who murdered his parents, and then pleaded for mercy on the grounds that he was an orphan.
Abraham Lincoln

The children despise their parents until the age of 40, when they suddenly become just like them - Thus preserving the system.
Quentin

Some believe all that parents, tutors, and kindred believe. They take their principles by inheritance, and defend them as they would their estates, because they are born heirs to them.
Alan Watts

In the transmission of human culture, people always attempt to replicate, to pass on to the next generation the skills and values of the parents, but the attempt always fails because cultural transmission is geared to learning, not D. N. A.
Gregory Bateson, "Mind and Matter".

From your parents you learn love and laughter and how to put one foot before the other. But when books are opened you discover that you have wings.
Helen Hayes

Parents were invented to make children happy by giving them something to ignore.
Ogden Nash

If a man withdraws his mind from the love of beauty, and applies it as sincerely to the love of the virtuous if, in serving his parents, he can exert his utmost strength if, in serving his prince, he can devote his life if in his intercourse with his friends, his words are sincere - Although men say that he has not learned, I will certainly say that he has.
Confucius

The only reason I always try to meet and know the parents better is because it helps me to forgive their children.
Louis Johannot

I think that we have created a new kind of person in a way. We have created a child who will be so exposed to the media that he will be lost to his parents by the time he is 12.
David Bowie

Religion holds the solution to all problems of human relationship, whether they are between parents and children or nation and nation. Sooner or later, man has always had to decide whether he worships his own power or the power of God.
A. J. Toynbee

The first half of our lives is ruined by our parents and the last half by our children.
Clarence Darrow

In every child who is born, no matter what circumstances, and of no matter what parents, the potentiality of the human race is born again and in him, too, once more, and of each of us, our terrific responsibility toward human life toward the utmost idea of goodness, of the horror of terror, and of God.
James Agee

When you read about a car crash in which two or three youngsters are killed, do you pause to dwell on the amount of love and treasure and patience parents poured into bodies no longer suitable for open caskets.
Jim

The car trip can draw the family together, as it was in the days before television when parents and children actually talked to each other.
Andrew H. Malcolm