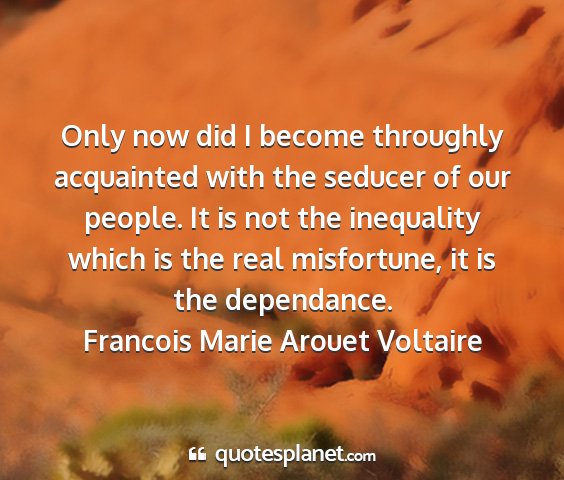 Humankind differs from the animals only by a little, and most people throw that away.
Confucius, Roots of Wisdom 4th edition

In the beginning, the universe was created. This made a lot of people very angry, and has been widely regarded as a bad idea.
Douglas Adams

You can choose to be happy or sad and whichever you choose that is what you get. No one is really responsible to make someone else happy, no matter what most people have been taught and accept as true.
Sidney Madwed

Christmas is the season when people run out of money before they run out of friends.
Larry Wilde

Listening is a magnetic and strange thing, a creative force. When we really listen to people there is an alternating current, and this recharges us so that we never get tired of each other. We are constantly being re - Created.
Brenda Ueland

Solitude would be ideal if you could pick the people to avoid.
Karl Kraus

Refuse to be ill. Never tell people you are ill never own it to yourself. Illness is one of those things which a man should resist on principle.
Edward Bulwer - Lytton

I want to do something different, really different, and if it alienates people that is too bad.
Kurt Cobain

People who comprehend a thing to its very depths rarely stay faithful to it forever. For they have brought its depths into the light of day: and in the depths there is always much that is unpleasant to see.
Friedrich Nietzsche, Human, All Too Human

To holy people the very name of Jesus is a name to feed upon, a name to transport. His name can raise the dead and transfigure and beautify the living.
John Henry Newman

Good leadership consists in showing average people how to do the work of superior people.
John D. Rockefelle

The essential matter of history is not what happened but what people thought or said about it.
Frederic William Maitland

No one lives long enough to learn everything they need to learn starting from scratch. To be successful, we absolutely, positively have to find people who have already paid the price to learn the things that we need to learn to achieve our goals.
Brian Tracy

Most people dread finding out when they come to die that they have never really lived.
Henry David Thoreau

People call me feminist whenever I express sentiments that differentiate me from a doormat or a prostitute.
Rebecca West

It is with narrow - Souled people as with narrow necked bottles the less they have in them, the more noise they make in pouring it out.
Alexander Pope

The character inherent in the American people has done all that has been accomplished and it would have done somewhat more, if the government had not sometimes got in its way.
Henry David Thoreau

Old age equalizes - we are aware that what is happening to us has happened to untold numbers from the beginning of time. When we are young we act as if we were the first young people in the world.
Jane Harrison

As you express joy, you draw it out of those you meet, creating joyful people and joyful events. The greater the joy you express, the more joy you experience.
Arnold Patent

It is absurd to divide people into good and bad. People are either charming or tedious.
Oscar Wilde

A common mistake that people make when trying to design something completely foolproof is to underestimate the ingenuity of complete fools.
Douglas Adams, Mostly Harmless

The only way most people recognize their limits is by trespassing on them.
Tom Morris

All in all, I am not surprised that the people who want to unravel the social contract start with young adults. Those who are urged to feel afraid, very afraid, have both the greatest sense of independence and the most finely honed skepticism about government.
Ellen Goodman

Is the chemical aftertaste the reason why people eat hot dogs, or is it some kind of bonus?
Neil Gaiman

People rarely succeed unless they have fun in what they are doing.
Dale Carnegie, How To Win Friends and Influence People

Doctors and nurses are people who give you medicine until you die.
Deborah Martin

A good manager is best when people barely know that he exists. Not so good when people obey and acclaim him. Worse when they despise him.
Lao - Tzu