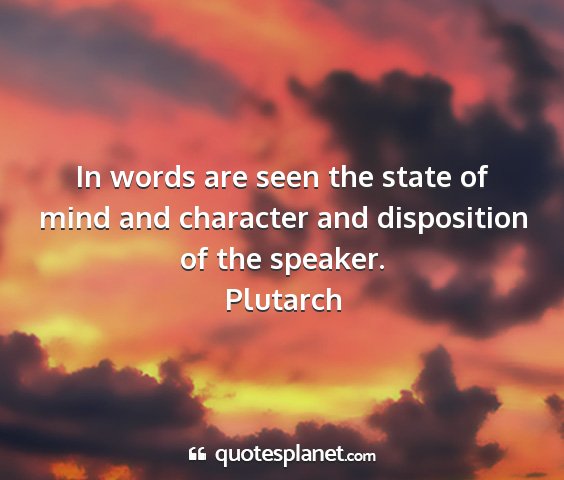 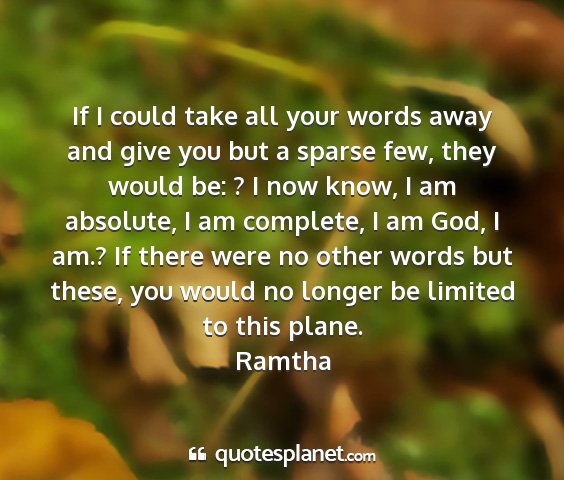 We will have to repent in this generation not merely for the hateful words and actions of the bad people but for the appalling silence of the good people.
Martin Luther King, Jr.

And He shall judge among the nations, and shall rebuke many people and they shall beat their swords into plowshares, and their spears into pruning hooks nation shall not lift up sword against nation, neither shall they learn war any more.
Isaiah

Do not fight verbosity with words speech is given to all, intelligence to few.
Moralia

Kind words are short and easy to speak, but their echoes are truly endless.
Mother Teresa 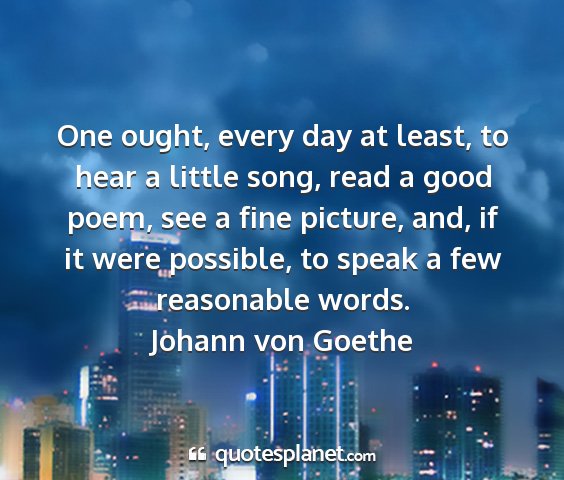 It is in our lives and not our words that our religion must be read.
Thomas Jefferson

One might equate growing up with a mistrust of words. A mature person trusts his eyes more than his ears. Irrationality often manifests itself in upholding the word against the evidence of the eyes. Children, savages and true believers remember far less what they have seen than what they have heard.
Eric Hoffe

My words fly up, my thoughts remain below. Words without thoughts never to heaven go.
William Shakespeare

A torn jacket is soon mended; but hard words bruise the heart of a child.
Henry Wadsworth Longfellow

Using words to describe magic is like using a screwdriver to cut roast beef.
Tom Robbins

I do not know the American gentleman, god forgive me for putting two such words together.
Charles Dickens

The most valuable of all talents is that of never using two words when one will do.
Thomas Jefferson

May no portent of evil be attached to the words I say.
Anonymous

For I am a Bear of Very Little Brain, and big words Bother me.
Winnie the Pooh

But words are things, and a small drop of ink, Falling like dew, upon a thought, produces That which makes thousands, perhaps millions, think.
George Gordon Byron

We have too many high - Sounding words, and too few actions that correspond with them.
Abigail Adams

My words fly up, my thoughts remain below Words without thoughts never to heaven go.
William Shakespeare

Words mean more than what is set down on paper. It takes the human voice to infuse them with the shades of deeper meaning.
Bertha Flowers

Witness at all times. If necessary, use words.
St. Francis of Assissi

An enormous part of our mature experience cannot not be expressed in words.
Alfred North Whitehead

If you would be pungent, be brief for it is with words as with sunbeams - The more they are condensed, the deeper they burn.
Robert Southey

One ought, every day at least, to hear a little song, read a good poem, see a fine picture and, if possible, speak a few reasonable words.
Johann Wolfgang von Goethe

We are shut up in schools and college recitation rooms for ten or fifteen years, and come out at last with a bellyful of words and do not know a thing.
Ralph Waldo Emerson

Hope is the thing with feathers that perches in the soul, and sings the words without the tune, and never stops at all.
Emily Dickinson

Deeds, not words shall speak me.
John Fletche

Think not those faithful who praise all thy words and actions; but those who kindly reprove thy faults.
Socrates

Man does not live by words alone, despite the fact that sometimes he has to eat them.
Adlai E. Stevenson Jr., quoted by Human Behavior, May 1978

Words must be weighed, not counted.
Polish Prove